Last week, the Children’s Hospital of Philadelphia (CHOP) has unveiled two new high-rise proposals, one at (tentatively) 3401 Civic Center Boulevard in University City in West Philadelphia, and another across the river at 690 Schuylkill Avenue in Schuylkill, South Philadelphia. The two towers will comprise a major portion of a $3.4 billion plan for upgrades the medical facility that is consistently filled to near full capacity, with the rest of the funds going to other hospital and research projects throughout the metro area, planned for completion by 20 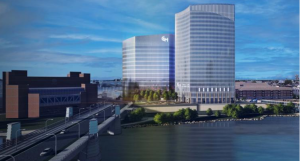 27. Both of the buildings will make a major impact on the skyline on either side of the river.

The South Philadelphia tower will be located at 690 Schuylkill Avenue next to the Roberts Center for Pediatric Research, a recently completed high-rise that is the first of CHOP’s towers to cross the Schuylkill River. The tower is located at the intersection of Schuylkill Avenue and South Street. To the south sits a large surface lot, where future high-rises are proposed. Infrastructure and park space spans much of the site at the moment. Plans for another tower have already been released, with more apparently still on the way.

The footprint of the structure appears strikingly similar to that of the completed Roberts Center. The $600 million tower will rise just past halfway the height of the existing tower, appearing to stand 13 to 15 floors in the rendering, and will feature the same design as the Roberts Center, albeit shorter, with an all glass façade and the familiar CHOP logo situated at the top. The two towers will stand just under 40 feet apart after completion. The high-rise will hold 470,000 square feet of research and lab space.

Although no address is specified for the University City tower, renderings appear to place it somewhere near at the intersection of Civic Center Boulevard and Osler Circle, apparently at the site of the Wood Pediatric Center at 3401 Civic Center Boulevard, a six-story, Postmodern structure. The building will stand 22 floors tall and come at a price tag of $1.9 billion, serving as a new patient center with 300 beds. All rooms in the tower will be single-patient units, something that CHOP will intends to implement in all of their hospitals.

The high-rise will stand near the CHOP Hub for Clinical Collaboration, a 19-story tower that is quickly rising into the skyline. The latest proposal will rise even more prominently above the surroundings, likely standing as the tallest building in the University City hospital cluster upon completion. This tower will also feature an all glass façade, with stylish curved corners giving the building a smooth look

The South Philadelphia tower is expected to finish some time before 2024. The University City tower has a planned completion date of 2027.

Did you know about this? World's first rotating glass building

The website Findashot.org may be a better way to get a COVID-19 vaccine appointment